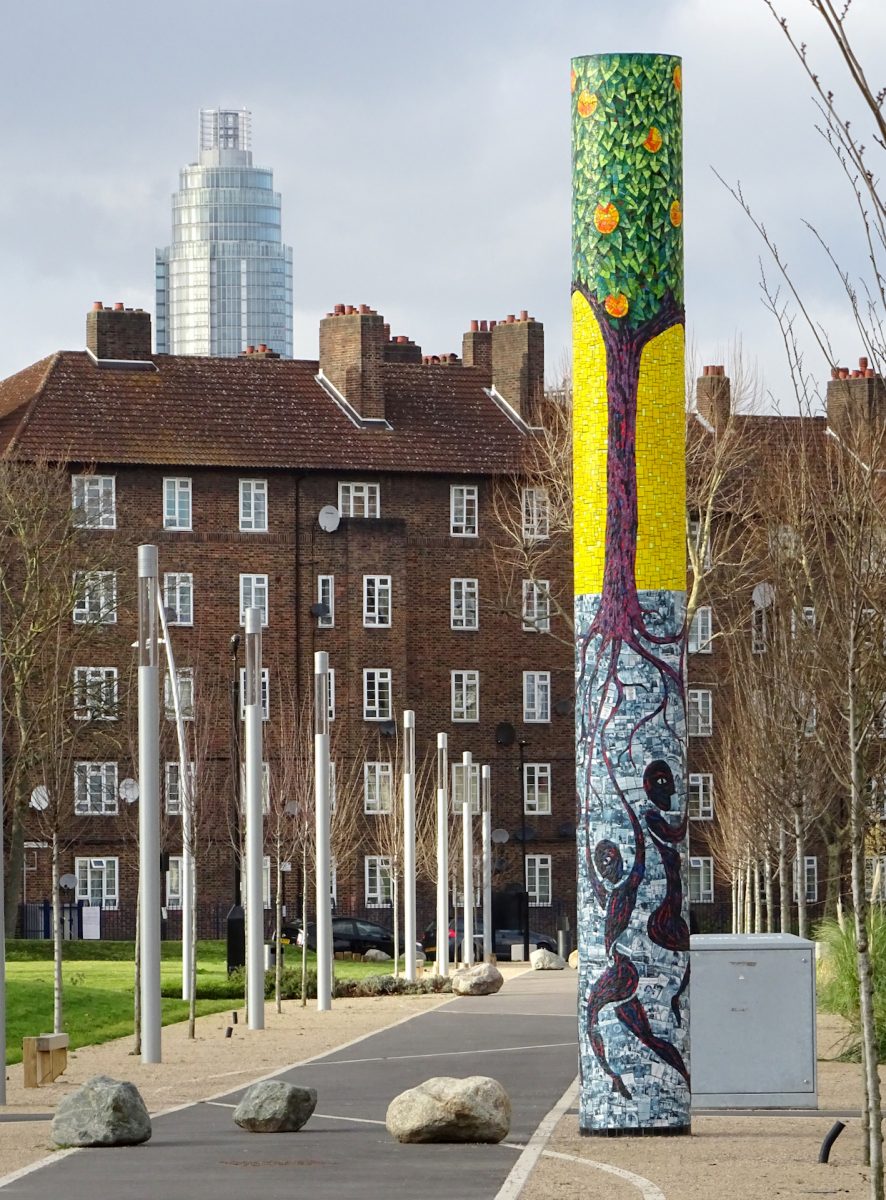 Creating a new landmark that embodies site identity and the spirit of the local community.

The tale of The Enduring Tangerine Tree

In this article I reveal the true story behind the ‘Tangerine Tree’ sculpture and look at how it not only inspired a new work of art but also symbolises the communities enduring spirit. Created for the new Eythorne Park in Brixton this mosaic sculpture tells the tales of Myatts Field and it’s community.

Local Myatt’s Field North estate resident, Marjorie Daley, brought back a tangerine seed from Jamaica. Her neighbours said it would never germinate, but she planted it anyway. The seed sprouted, and people said it could never grow in the English climate, but she tended it anyway. The tree grew in her garden but they said it would never fruit. Marjorie cared for the tree and after many years the tree bore fruit. Then came the developers, ‘we are going to regenerate this area, everything will be demolished and a new estate built’. It looked like the end for Marjorie’s tangerine tree, and the end of the community she knew. The bulldozers moved in, but the story of Marjorie’s tangerine tree moved people, and as the houses and flats were torn down everyone worked around the tree and it remained standing solitary in the middle of the building site, surely the tree could not survive the turmoil.
But the tree did survive, and now stands in the centre of the new Eythorne Park.

This was the story that inspired the new site specific Myatt’s Field artwork for Brixton in south London. For me the story symbolises the strength and edurance of the local community in Myatts Field North, and what I wished to create was a monument to that community, and a physical manifestation of that communities memory and history..

I envisioned the tangerine tree as the symbol and fruit of the community, with it’s roots as the local people and the earth it was growing in as the accumulated history of the area and it’s residents. 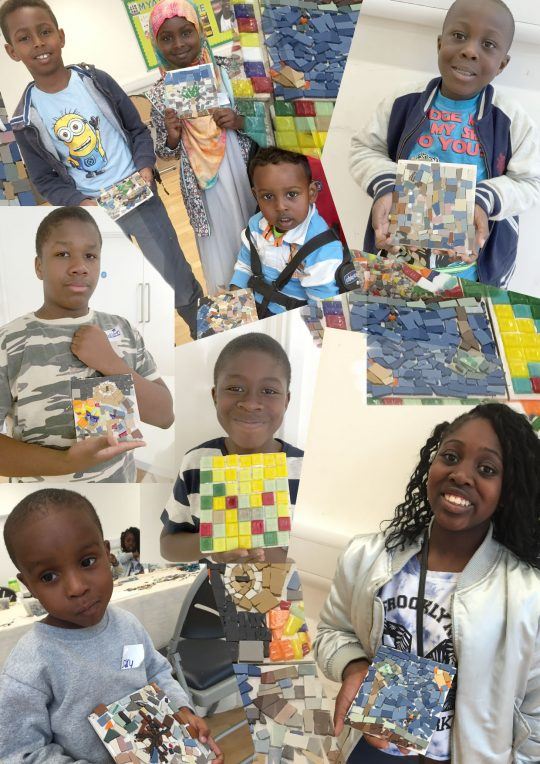 Capturing the essence of community and history

In order to reflect the memories and history of the area I wanted to include photographs and images fired onto porcelain tiles to create a mosaic of memory. Gathering these pictures began with the community itself. Through workshops with local residents, a Facebook page, and attending community meetings I gathered the residents precious photographs and memories. These images were added to with historic research at the local Minet library and the black history archive and various related news and history websites. Images were selected to cover three basic groups: Personal and family photos (donated by the community); architecture (the changing face of the area, buildings, maps and street names; news and events (well know faces, events and history that made the area what it is today)..

Once the hundreds images were gathered together they were rendered in a blue hue to harmonise the images together and then fired onto durable porcelain tiles. These tiles were then cut and laid into the mosaic. 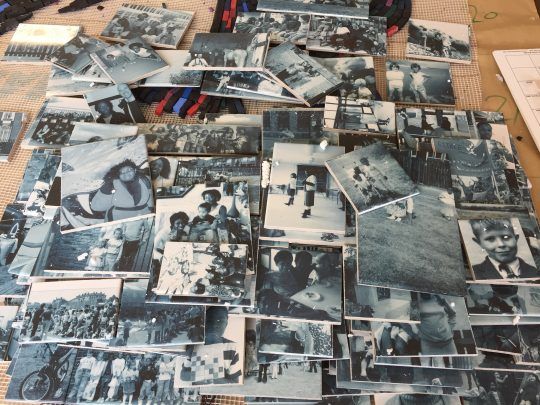 Talking to residents and researching the history made me very aware that the history portrayed in the mosaic should be full, as one resident put it “the truth is bitter but it’s better”. By using the photographs, archive images, newspaper clippings, maps, posters and text extracts to bring together all aspects of the life and history of the community the result is amazing. When you stand and look at all these disparate images together, good times and bad times, your eyes jump between the detail of each event and the overall impression of the richness of the community..

The final artwork was created by casting a seven metre high column in concrete on-site in the selected spot at the meeting point of a number of the parks paths..

While the concrete column cured the mosaic was made in the studio. Using hand made Venetian Glass Smalti Piastrina, Litovi hand made vitreous ceramic (a new material from France) and the photo printed porcelain, the mosaic was cut and constructed onto a temporary net backing. Construction of the mosaic took nine months and once complete the mosaic was transported to the site, cemented to the column, and grouted in. 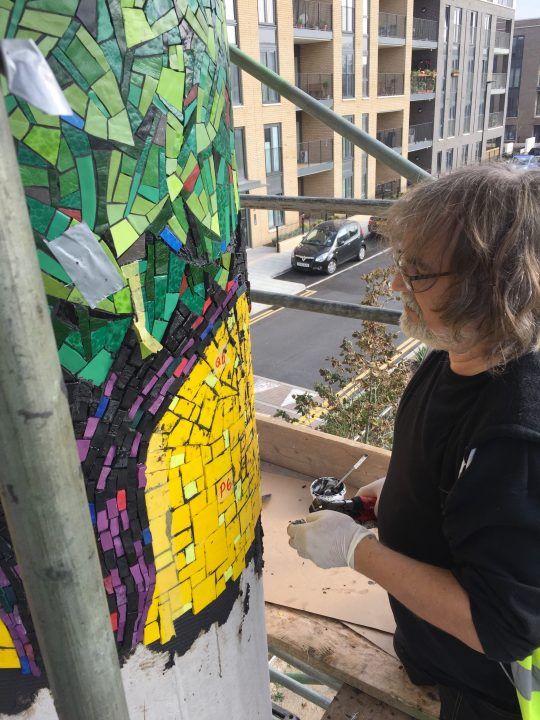 You can find ‘The Enduring Tangerine Tree – a celebration of the community of Myatts Field North’ at the junction of Cromwell Road and Eythorne Road, London, SW9.

Are you planning a site specific artwork?

Why not cut your research time by arranging my free 30 minute consultation.

We can discuss the specific requirements of your project and you can benefit from immediate and experienced feedback.

Leave your details here and I will contact you to arrange an appointment.

News, updates, events and behind the scenes snippets from the Drostle Public Arts studio straight to your inbox. 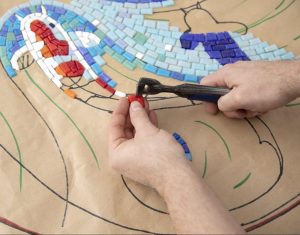 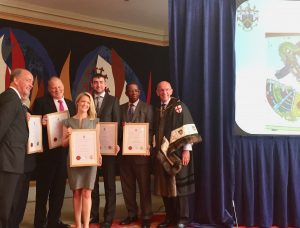 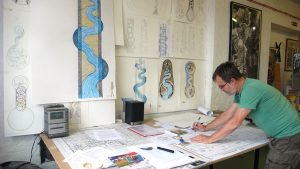 Getting the design that’s perfect for you

Here I look at some examples of how designs for bespoke mosaic works developed into the final mosaics.

Power up your commissioning knowledge 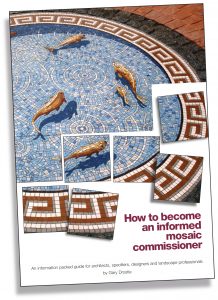 By reading this simple 4 stage guide you can avoid the pitfalls and plan a smooth commissioning process to a successful and stunning unique mosaic artwork.

Get your copy here
Menu
More About Gary

Artist Gary Drostle has been creating award winning site specific artworks from his London studio for over 30 years.

Here to answer your questions...

I will be in touch to arrange your appointment as soon as possible.

Currently all appointments are being carried out by ZOOM in order to comply with the Covid restrictions.

I look forward to speaking to you soon. 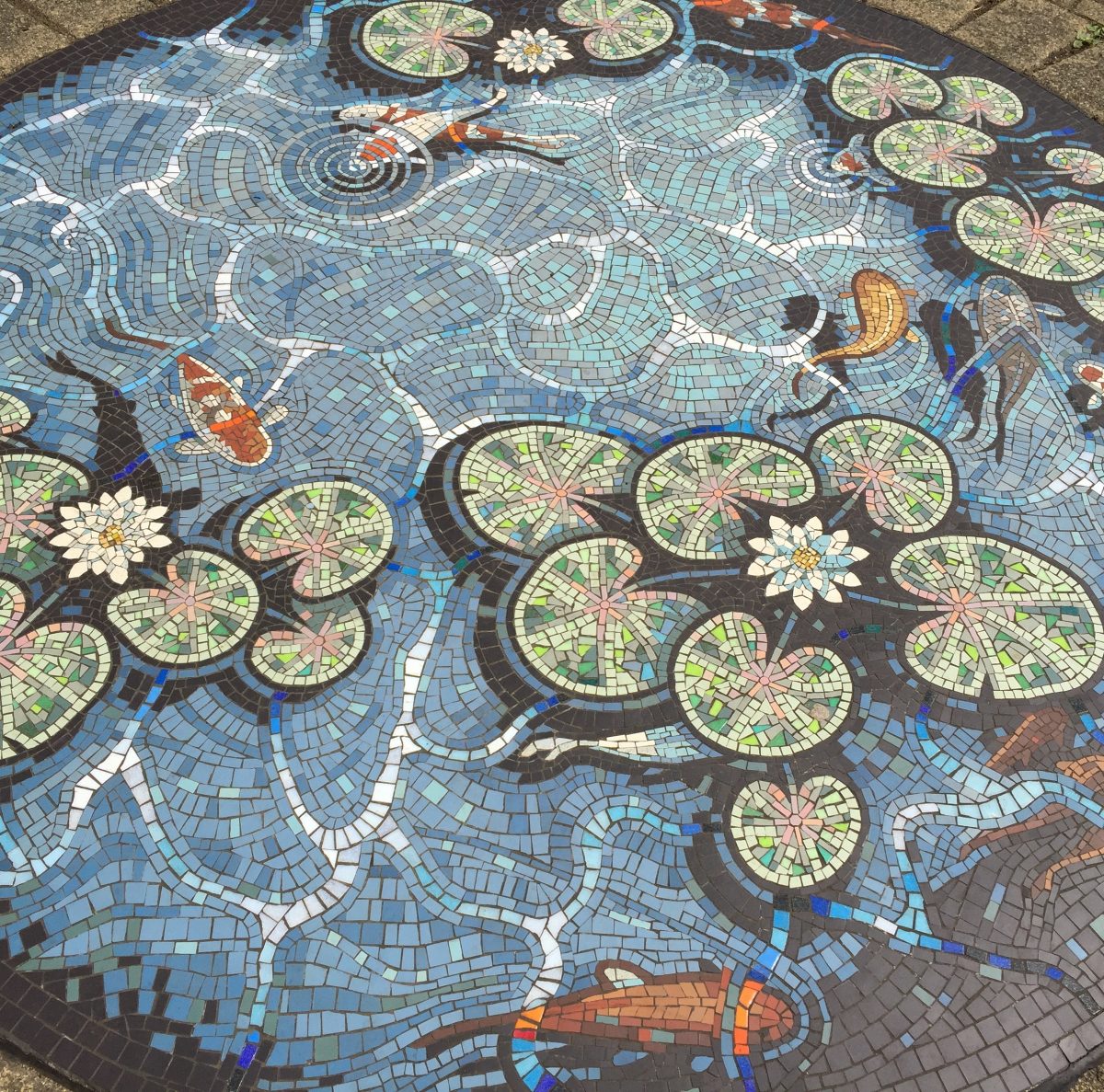 Thank you for your message

I will be in touch as soon as possible